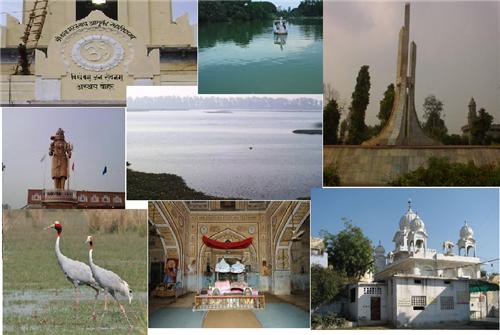 The State of Haryana in India in northern India is a very well known place and is also a favorite destination for tourists who like to enjoy the historical sites and the beauty of nature that the place is bestowed with. Of the 21 districts of the state is the Rohtak District which is also popularly referred to as the ‘Heart of Haryana’. The district comprises of a couple of tehsils- Meham and Rohtak.

Situated in the southeast of Haryana, this district in Haryana is only 70 kilometers away from the national capital of India- New Delhi. Under the Rohtak tehsil, there have been further divisions into three Community Development Blocks namely Kalanaur, Rohtak and Sampla. In the same way, Meham tehsil include Lakhan-Majra and Meham. The district may have been named after Raja Rohtash under whose patronage the area is believed to have been developed. Another school of history believes that the name of the city is because of the tree Roherra whose Sanskrit name is Rohitaka which used to be found in abundance here.

Travel in Rohtak is done through the interconnected roads within the district and people who visit the district have options of road transport and also the trains that ply between some important stations. The roads and the highways connecting Rohtak are very well managed and there are many future plans which have already been drawn to make them even better.

Those who are new to Rohtak and want to travel within the city or cities located nearby can contact the Travel agents in Rohtak.

Rohtak is known for its religious places. There are many temples and gurudwaras and also prominent churches that people come to from far flung areas to worship and offer their prayers. Some of the noteworthy temples are - the Lord Hanuman temple which is located at the Gohana Adda Road in Rohtak. Also situated in village Kharawar is the Sai Temple which is very famous among the devotees of the Sai Baba.

The Sikh Guru Tegh Bahadur has had an important association with Rohtak and the Bangla Sahib Gurudwara is proof of how he was instrumental in guiding the people of Rohtak towards peace. Apart from these, there are other temples like the Durga Bhawan Mandir, Shitla Mata Mandir, Shiv Mandir, Sankatmochan Mandir and a Gufawala Mandir.

The noteworthy churches of the area that people frequent for praying are St. Francis Xavier’s Church and the All Saints Church. Among mosques the Dini mosque and Jama Masjid in Rohtak are worth mentioning. The list of Hindu Temples is long and also includes the Pehrawar Mandir, the Ram Mandir and the Arya Samaj Mandir.

Rohtak has great and long lasting connotation with the pasts and the rich history of the place. One of the attractions in Rohtak is the Tilyar Lake which is a picturesque picnic spot on the banks of the Lake. The serene water is great for boating and angling and is very famous among the tourists.

Another historical place which catch visitors’ attention are the Khokar Fort where there are remains dating back to the ancient periods. There is also the Goakaran Tank which is an old tank situated in the district with various temples situated in its premises. There is also a Dharamsala and a park close by which is a great place for children.
When one is in Rohtak, a visit to the Bhindawas Lake is a must because it is the only official wild life sanctuary of the place and is home to thousands of birds and is also an abode for the migratory birds.

The town of Meham near Rohtak is also a place of astounding significance because of its association with the epic Mahabharata.

People are spoilt for choices when it comes to shopping in Rohtak. There are numerous shopping destinations in Rohtak that both the tourists and the locals frequent for all their shopping needs. These malls are famously called as the Merion Sky Mall, the Shopping at Sector 14 Market, Jop Square Mall, the Agro Mall, and the Sheetal Life style Mall among others. There have been sufficient brand invasion in the malls of Rohtak and all the premium brands are at the behest of the shopaholics. Every essential and luxury commodity can be found in the shopping centers of Rohtak.

There are many resorts and hotels in Rohtak that cater to all sections of people in Rohtak. Myna Resort is one such resort that is situated in the town of Rohtak. This motel is a great property that has all the modern amenities. There is a restaurant, a bar and also a conference hall for the executive travelers who wish to conduct business meetings here. The staff and the facilities here are very hospitable and the hotel overall rank quite high on customer testimonials.

Other hotels in Rohtak which are worth mentioning are A Square Continental, Hotel Cocoon, Hotel Platinum Plaza and Hotel Royal Mall among several others. The rooms with the hotels are all very commendable and offer the traveler great accommodation facilities while visiting Rohtak. While some of them are advised because of their strategic locations, others have their USP’s in providing superior rooms and better facilities for the travelers. Almost all have standard, deluxe and super deluxe rooms which cater to all kinds of people and their varied budgets.

To know about some more hotels situated in the Rohtak city, click here.

Parks and Gardens in Rohtak

Among the parks and gardens in Rohtak, the very famous one is the Rose Garden which is a great spot for the people who love nature. The garden is beautifully landscaped and is a thorough visual treat for the eyes. The varieties of roses that can be found here are some of the unique ones which may not be present in other horticultural parks. The plants here are well tended and looked after and hence the place too is very well taken care of and is aesthetically very pleasing.

There is one more park in Rohtak which needs mention and its the Mansarovar Park which is situated near the Sharda Flyover in the Jhilmil Industrial area. These vast expanses of greenery in Rohtak gives great respite to the locals and the tourists and have a very pleasant atmosphere where people come to rest and relax and have some outdoor fun.