Rohtak is a bustling district on the outskirts of Delhi in the National Capital region of India. The name ‘Rohtak’ was derived from Rohtasgarh, which is an ancient site lying in the northern part of present day Rohtak. Rohtasgarh was named after its ruler Raja Rohtas, during whose rule the city was built. Another popular belief behind the naming of Rohtak says that, before the district was built, the site had a forest of Rohitaka trees. It is also believed that the Pandava warrior, Nakula had led a campaign on this land too. So, we see that the history of this place dates back to the ancient ages.

The administration of the place was under various rulers over the course of history. During the rule of the Mughal Emperor Akbar, Todar Mal, his minister had divided the administration of North India under many Subedars. Rohtak was under the Suba of Delhi. It was administered by the Sarkars from Delhi and the Firuqa from Hisar. During the Sultan and Mughal Empires, the district of Rohtak was under the rule of various jagirs at various points of time.

Formation of Independent Rohtak after 1884 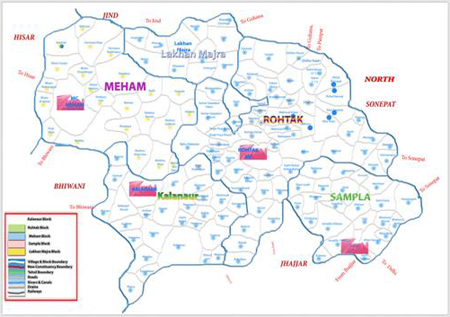 The British administration divided the parts of Rohtak among various military chiefs. However, with the passage of time the chiefs either gave up their possession or passed away. The present day Rohtak was formed during this period of time. The territories of Beri, Meham, Rohtak, Kharkhoda-Mandothi and Gohana constituted the district of Rohtak. Since then, the district of Rohtak underwent a series of changes.

Territories were taken away and then added. Rohtak was added to Punjab in 1858 by the Govt. of India, which was then under the rule of the British Empire. It remained under Punjab until 1884. During the period of time when Rohtak was under the Punjab Division, it again changed forms several times. After 1884, Rohtak was once again passed on to the Delhi division. At this point of time, Rohtak comprised of the following four tehsils – Rohtak, Jhajjar, Sampla and Gohana. 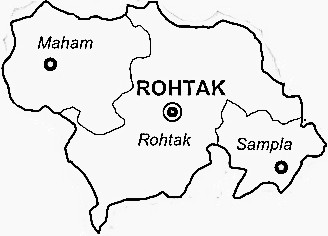 Since the independence of India, Rohtak kept on going through a series of changes. Old tehsils were abolished and new ones were formed. The district was bifurcated several times to make it easier for the administration to rule over it. The last major change took place in the year 1997, when the district was divided into the Jhajjar and Rohtak districts. The present day Rohtak consists of the Meham and Rohtak tehsils. It has been quite an eventful history for the district of Rohtak. The place has seen rulers from the Pandavas to the British. The district has the influences of the various rulers to this day.

Explore more about History of Rohtak