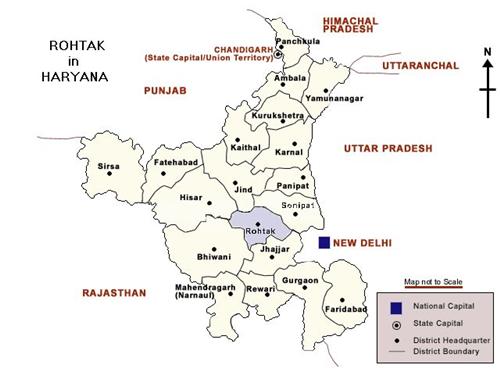 The district that lies in the southern east region of Haryana is named as Rohtak which is one among the 21 districts of Haryana state. It is encompassed by the districts of Jind, Sonipat, Jhajjar, Hisar and Bhiwani, in the north, south, east and west side respectively.

Area and Population of Rohtak

The district houses 151 panchayats and 146 villages with the rural population of 613864. As per the census of 2011 the urban population of Rohtak is 444819. The district covers the area of 1668.47 square kilometers in which the rural population occupies 57.98% of the total population. The district’s economy is based on agrarian economy and so there are 51.89% of total workers who are involved in agriculture and associated activities. Rest of the percentage is involved in other activities with 7.68% in household and cottage industries. 83% of the district’s geographical area consists of cultivation with the outputs like wheat, sugar gram, etc.

The climate of Rohtak is familiar to other districts of Haryana and northern region of India. Summers ar too hot with maximum temperature of 50 degree Celsius and winters temperature sometimes goes down to 1 degree Celsius. May and June are the hottest month of the region and December and January being the coldest. Rainfall varies in different region with the Aravalli Hills region being the driest and the Shivalik Hills region is the wettest.

The following are the physical attributes of Rohtak:

Rivers like Yamuna, the Ghaggar and the Sararwati flows through some parts of Rohtak. Some of the several streams which flow through the district are Markhanda, Indori and Sahibi. These are the major sources of agriculture in the district as well as the state. The river Tangri after reaching Rohtak with its tributaries, make branches into smaller streams of two and finally reaches the outskirts of Delhi and get mingled with Yamuna.

Tilyar Lake lies at the distance of 70 km from Delhi and close to the town of Rohtak. It is spread in the area of 132 acre and is said to be the greenest stretches in its integral part which is hard to believe. It has options of toy train and boating for the tourists. Pehrawar Lake is another lake with Asthal Bohar and Kharawar railway stations nearby.

Shivalik Hilla near Rohtak district varies in the altitude between 900 and 2300 meters. Saraswati, Tangri, Markhanda and Ghaggar are the rivers that are originated from these hills and passes through the parts of districts like Yamunanagar, Ambala and Panchkula. Nearby districts of Rohtak like Sirsa, Hissar, Bhiwani includes the semi-desert and sandy plains area. Aravalli Hills is irregular and dry hilly area.

Sultanpur Bird Sanctuary, Tilyar zoological park and Khaparwas Wildlife Sanctuary are some of the best recreational and outdoor activities which are the parts of these flora and fauna. Tilyar zoo is surrounded by the Tilyar Lake which is also a hub for many migratory birds. The species of fauna found in Rohtak include nilgai, fox, jackal, black duck, mangoose, wild dog and panther. There are more than 300 species of birds found all over the state.

Apart from Northern districts of Haryana, Rohtak in the south east region is the major area that covers the forests of Haryana. These forests include the Shivalik region’s Tropical Moist Deciduous, the Tropical Dry Deciduous in the eastern part and Tropical Thorn Forests in the western region of the state. Forests contribute small but important source of earnings for the rural part of the district and hence improves the economical condition of the state.

Among other districts of Haryana Rohtak is gifted with good mineral resources like Limestone, Iron ore, sulphur, marble, etc. These are among the 20 diverse minerals found in the district.

Dams and Canals in Rohtak

The Bhakra Dam is the major dam of Haryana which is the irrigation source of the agriculture in Hisar, Gurgaon and Rohtak. The dam serves a vast area of Haryana and it is a small part among 15 lakh hectares including Punjab and Rajasthan. About 49-89 percent of Rohtak is irrigated by canals of Haryana. This percentage ranks second after Chhatisgarh. The Western Yamuna Canal with its distributaries has the total length of 3200km and it irrigates 4 lakh hectares in Rohtak and other regions like Ambal, Panipat, Hissar, Faridabad, Kurukshetra and several others. Jui Canal is designed to for the irrigation of semi desert regions of Rohtak, Bhiwani and other adjoining areas. The length of the canal is 169 kilometers and it irrigates approx 32 thousand hectares of the regions of Haryana.

Being enclosed by developed regions like Gurgaon and Chandigarh, Rohtak has gained a sound popularity among visitors. The Information Technology and Automobile industries of Gurgaon have attracted number of students and professionals from Rohtak. Since Haryana is the largest manufacturer of two wheelers, passenger cars and tractors, it has become a major hub for the farmers and workers of Rohtak and other districts as well.